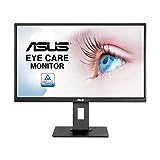 The 27” full HD (1920×1080) VA279HAEL monitor features a 178° wide viewing angle display, with VESA mounting compatibility and an ergonomic stand for ease of use. Asus Eye Care technology minimizes eye fatigue with flicker-free technology and blue light filter. Seamlessly connect to your devices with HDMI and VGA.